Throughout much of history, cannabis has been viewed as a miracle plant thanks to its healing potential and mind or mood altering effects. Now science is getting heavily involved as researchers work to unlock the secrets of cannabis and understand its full potential.

Scientific studies are still essentially in their infancy, but so far have shown us that these effects and reported benefits are delivered by the multitude of compounds contained within the cannabis plant called cannabinoids.

We’ve all heard of the most famous ones, Tetrahydrocannabinol (THC) and Cannabidiol (CBD), but recently there’s a new compound that is making news – Tetrahydrocannabivarin (THCV). It’s another fascinating compound, to say the least, one that shows a lot of promise and is being studied.

The compound THCV is similar to THC in more than just its name. Both compounds have molecular structures that are very similar, even if the effects reported are quite different. THCV is basically a THC molecule with the end removed and is thus called an analog of THC in scientific terms. As the diagram shows, the difference is very slight. 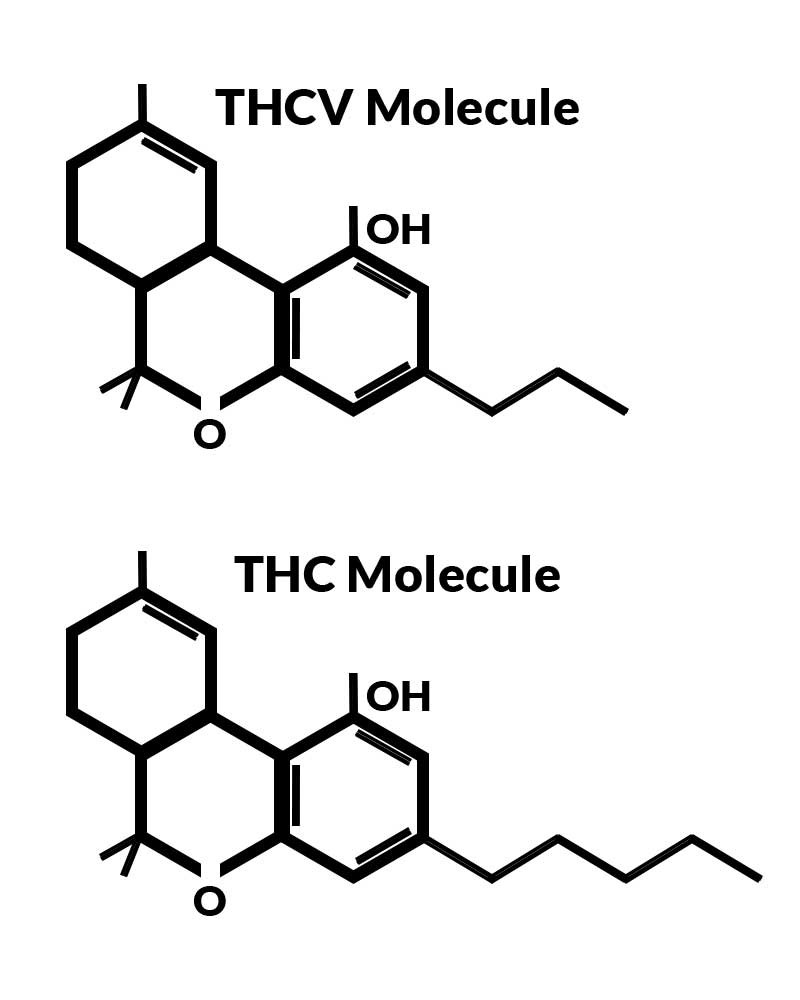 The science is quite complicated but THCV has researchers convinced that it’s amongst the most important and beneficial compounds contained within cannabis. There is lots more research still to be done, but THCV has been showing itself worthy of the attention it’s been garnering.

Why the fuss over THCV?

THC is the undoubtedly most famous cannabinoid due to its psychoactive properties. Second place belongs to CBD, which is known largely for its reported health benefits and because it doesn’t get you high. So where does THCV fall in comparison?

THCV, like many cannabinoids, seems to have a lot of potential for medical purposes such as suppressing appetite, diabetes control, anxiety relief, stimulating bone growth and helping with Alzheimer’s. However, testing and research are still very limited meaning not much has been scientifically proven as of yet. Much of the current focus has been on how THCV actually differs from THC or CBD, and here the science is a little more concrete.

THCV was first mentioned in a seminal article in the early 1970s but wasn’t used in studies until recently. As mentioned earlier, THCV is a close cousin of THC, but early studies suggest it carries about a quarter of the potency of THC. Low doses of THCV appear to cause effects similar to those of CBD and dampen the effects of THC by acting to block CB1 receptors. As the dose increases though, THCV begins to activate CB1 receptors instead and cause a psychoactive effect, even though it’s not as strong as the high from THC.

Where is THCV found?

THCV is a minor cannabinoid which is found at trace levels in the majority of cannabis strains. Certain strains, like those descended from Africa, typically contain higher THCV concentrations. Leafly reports that strains such as Doug’s Varin, Durban Poison, Skunk #1, or Red Congolese, are often THCV rich but even here, concentrations are varied.

If you’re looking for THCV:

THCV shows a lot of promise as both a strain for consumers, but also as a medical compound. As research continues, expect to see a variety of THCV isolates appear, that will provide the market with a concentrated dose of this precious cannabinoid.